The code snippet in Listing 1 from a J2EE web application shows an example of such tactical vulnerabilities which is the incorrect implementation of the “Manage User Sessions” tactic. The correct implementation of this tactic in a web application would allow the system to keep track of users that are currently authenticated (including permissions they hold). However, in the given code snippet, the application authenticates users with LoginContext.login() without first calling HttpSession.invalidate() to invalidate any existing session. This enables attackers to fixate (i.e., find or set) another user’s session identifier (e.g., by inducing a user to initiate a session using the session identifier provided by the attacker). Once the user authenticates him/herself with this forged session identifier, the attacker would be able to hijack or steal his/her authenticated session. Although architects have used the “Manage User Sessions” tactic in the architecture design of the web application, the developers have failed to implement it correctly, resulting in a tactical vulnerability that can be exploited for session fixation attacks. 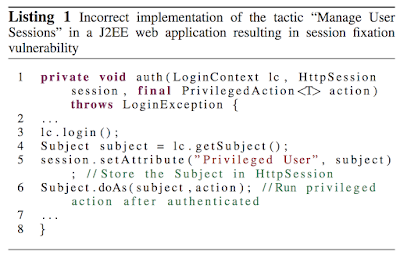 Recent empirical studies of security vulnerabilities have neglected the architectural context, including design decisions such as tactics and patterns. They mostly focus on studying and understanding coding issues related to the management of data structures and variables (e.g., buffer overflow/over-read).

Goal of This Study

Here, I’d like to report an in-depth case study of software vulnerabilities associated with architectural security tactics across three large-scale open-source systems (Chromium, PHP, and Thunderbird). In this blog post, I only present the results, the scientific process and systematic approach used to make the conclusions can be found in our research article here.

While Chromium, PHP, and Thunderbird have adopted a wide range of architectural tactics to secure the systems by design, a remarkable number of vulnerabilities discovered in these systems are due to incorrect implementations of these tactics.