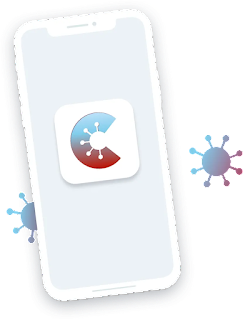 Over the past eight months, the novel coronavirus has impacted each and every aspect of our lives. What would’ve seemed like a narration of a sci-fi movie until 2019 is our bitter reality today. An integral part of this new reality are contact-tracing apps. We covered the factor leading to the widespread rejection of Australia’s CovidSafe app and how it failed to deliver on its promises in the first blog of this series. This entry explores the factors surrounding Germany’s national contract tracing application -- Corona-Warn-App. Corona-Warn-App notifies the users if they’ve been in contact with someone who tested positive for COVID-19. The app further allows users to receive their test results from the testing labs on the app.

The “German” Engineering and Transparency

Engineering Practice and Implementation. Corona-Warn-App first launched on June 16, 2020 and has been updated several times after the fact. The app has been developed using Google and Apple’s Exposure Notification framework and works with Bluetooth low energy, and stores locally the randomized identifiers of the other phones it comes in contact with. The unique identifiers of each phone are valid only for 10-20 minutes, and are updated thereafter. Among the global contact tracing apps split over centralized vs decentralized mode, the german app took the more secure decentralized path. The randomized identifiers of a user’s contacts are stored locally on the phone, and only voluntarily stored on a central server, when the users test positive. No personal data is stored by the app. The app was launched in two languages -- German and English, and has since been updated to include Turkish, Bulgarian, Polish and Romanian, with plans to further extend it to Arabic and Russian.

Democratic Practices. Germany’s Corona-Warn-App, vis-à-vis numerous contact tracing apps from other countries,  stood out on several levels. The app development was based on democratic principles, wherein the federal health institute - Robert Koch Institute (RKI) (i) involved reputed public and private partners for developing and supporting this app -- such as SAP, Fraunhofer research institute, Deutsche Telekom, and Centre for Information Security, (ii) maintained transparency in the source code management by making it open source from the very outset of its launch, and (iii) designing the app based on GDPR principles to alleviate any issues related to data privacy. The app was fully backed by the government as support to the manual contact tracing system and for spreading awareness in public on coronavirus, and even termed it as the “best app” globally for this purpose. 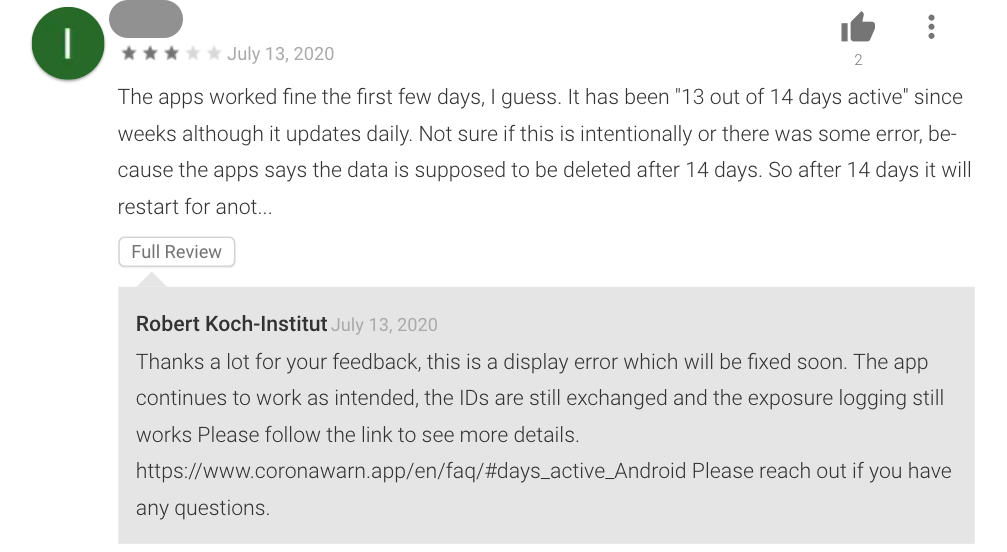 Engagement with the Users. As we noted in our first blog, our previous research established that the dissatisfaction of users can result in software project failures even if it is delivered on time, on budget and is of high quality. In particular, in countries like Germany with a low-trust index of the citizens in their government, an indication of non-democratic or non-inclusive practice could lead to dissatisfied users. Given the low trust in government, the app had slim chances of success and adoption, especially given the exorbitant 68 million Euros estimated cost of the app by the end of 2021. RKI’s democratic practices outlined above improved these chances. The developers gained and maintained the trust of the users by staying in contact with the users. The developer-user communication contributed significantly to the adoption of the app.

As per the statistical forecasting by Oxford University’s Nuffield Department of Medicine and Alphabet Inc (Google), a contact tracing app, such as, Corona-Warn-App if regularly used by 15% of the population alongside a well-staffed contact-tracing workforce can potentially lead to a 15% drop in overall infection rates and an approximate 11% drop in COVID-19 deaths. With 18.4 million downloads recorded as of 23rd September 2020, more than 20% of the population in Germany has already downloaded the contact-tracing app.

While the number of downloads, in proportion to the population, is encouraging to compare with other countries such as Australia, the number is still low. In a country of more than 83 million inhabitants with approximately 57 million of them owning smartphones, the contact tracing app can not be simply termed as “success” or the “best” contact-tracing app. While the German app, against some odds, seems to have more than 18 million downloads, the number of downloads is still less than one-third of the maximum number. The app completed 100 days in operation on September 23rd 2020. The officials reported only 5000 of 277376 people (that tested positive for COVID-19 in Germany) voluntarily shared their result as positive and their contact results on the app. Despite such results, the app was termed as the “best app”. In the next section, we discuss the possible grounds for low adoption rates and what went wrong for the German app.

What went “schief” for the Corona-Warn-App

We collected all the user reviews from both the Apple store and the Google store for the iOS and Android versions of the app, respectively, from the onset of the app to September 15th, 2020. We base our analysis on the reviews collected.

Technical Issues. Based on the user reviews of the app on Google Play store and the App store from Apple, more than a quarter of the reviews complained about bugs in different versions of the app. While developers of the app, to their credit, maintained a chain of communication with the reviewers on both the App stores, the app and its adaptability has been definitely affected by glitches and bugs throughout its lifespan so far.

The second most prevalent issue in the app (according to the user reviews) is related to the platform and devices. Corona-warn-app has major issues with iPhones and did not work with Android phones either for up to five weeks due to issues in the operating systems. The app further does not work with older OS versions in both iOS and Android phones. For instance, for iOS devices one would require a phone with iOS version 13.5 or later, and similar technical restrictions exist for Android devices. According to an estimate by experts, Corona-Warn-App wouldn’t work for 10-20% of devices in Germany, i.e., this section of the population is divested of the benefits offered by digital contact tracing.

Lack of Cultural Considerations. While the app was available in English and German from the beginning, and Turkish (given a large fraction of Turkish speakers in Germany), the app does not yet include Arabic and Italian languages. As inferred by the following review on the app in the Google store - “Die App muss mindestens auf italienisch, spanisch und arabisch verfügbar sein :) halbe Million Italiener, 2 Millionen arabisch sprechende wohnen in Deutschland.” translated as “The app must be at the very least available in Italian, Spanish and Arabic. There are 0.5 million  Italian and 2 million Arabic speakers living in Germany”. With the influx of Arabic (and Kurdish)-speaking asylum seekers and migrants in Germany in the past few years, it was naturally expected for the Corona-Warn-App to be available in Arabic, which unfortunately has not been the case. In fact, in a recent turn of events, the government claimed that translation of the app in Kurdish will cost a sum of 250,000 Euros.

Privacy and Effectiveness Concerns. Many users, from the 18 million that downloaded the app, claimed that they would uninstall the app or will discontinue using it. As per the experts, only 15 million are active users, which is a major blow to the effectiveness, in addition to and not discounting the fact that a large fraction of potential users did not install the app in the first place. Germans still do not fully trust the privacy and data protection of the app, and the concerns remain over the period as suggested by a survey conducted by TU München. The survey reflects that around 9% more people (from July’2020 to August’2020) feel that they will not use the app in any case. More than half of the respondents also mentioned that they do not believe that the app can be effective or can have any impact.

In conclusion, the German app trumps several contact tracing apps across the world in terms of democratic practices, number of downloads, and user-development engagement. However, the overall effectiveness of the contact tracing app is yet to be determined. With the rise in the cases, in what is deemed as the second wave in Germany (illustrated in the chart above), the doubts around the effectiveness of the app are increasing. 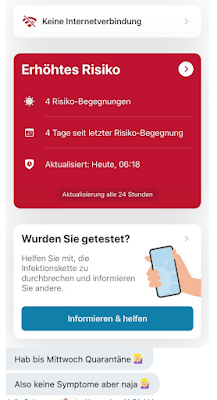 In addition, the voluntary model of downloading the app (in countries with the low-trust index on government like Germany), and voluntary sharing of the contact list by the infected people has a huge impact on the adoption and effectiveness of the app. User dissatisfaction and lack of confidence in the app are apparent. In our opinion, the app needs to be further improved, and the developers and the government have an uphill task of (re-)gaining the trust of citizens before reiterating their rhetoric of Corona-Warn-App being the “best” app in the world.
Posted by Dr Muneera Bano at 9:23 AM No comments: