Why should I bother to refactor duplicated code in my project?
Duplicated code (also known as code clones) can be a potential big trouble for the maintenance of your project. Not all clones are harmful [1] or equally harmful [2]. However, if you find yourself repeatedly applying the same changes (e.g., bug fix) in multiple places in your code, you should definitely consider to refactor [3] this duplication. Merging such clones into a single copy will make future maintenance faster and less error-prone.

Why is tool support necessary for the refactoring of clones?
Software clones tend to diverge after the initial copy-and-paste. This happens because developers have to adjust the copied code to a new context and/or different requirements. Therefore, clones tend to have non-trivial differences as the project evolves (e.g., different methods being called, or completely different logic in parts of the implemented algorithm). Unfortunately, the current state-of-the-art IDEs support the refactoring of clones with trivial differences (i.e., identical clones with variations in whitespace, layout, comments, and variable identifiers).

JDeodorant [4] is an Eclipse plugin that can help developers to inspect the differences between clones in Java projects, and refactor them safely, if possible. More specifically, JDeodorant applies a sophisticated static source code analysis to examine whether the parameterization of the differences appearing in the clones is free of side effects. We refer to this feature as refactorability analysis [5]. If all examined preconditions pass successfully, JDeodorant can proceed with the refactoring of the clones.

Figure 1: Presentation of the imported clone detection results to the user
Feature 2: Clone visualization and refactorability analysis
The user can right-click on any pair of clones from the same clone group, or any pair of methods from the Eclipse Package Explorer and select “Refactor Duplicated Code…” from the popup menu. The outcome of the clone pair analysis is presented to the user as shown in Figure 2. 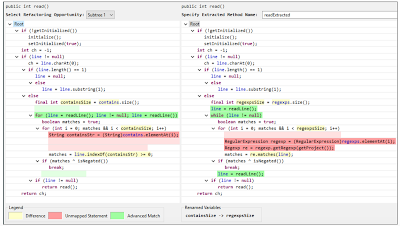 The analyzed clone fragments appear as two side-by-side trees, where each pair of tree nodes in the same row represents a pair of mapped statements in the first and second clone fragment, respectively. The user can inspect the clones in a synchronized manner, by expanding and collapsing the nodes corresponding to control statements (i.e., loops, conditionals, try blocks). The code is highlighted in 3 different colors to help the developer inspect and understand the differences between the clones.
By hovering over a pair of statements highlighted in yellow, a tooltip appears providing semantic information about the type of each difference based on the program elements (e.g., variables, method calls, literals, class instantiations) appearing in the difference. Currently, JDeodorant supports over 20 difference types, including some more advanced ones, such as the replacement of a direct field access with the corresponding getter method call, and the replacement of a direct field assignment with the corresponding setter method call. In addition, the tooltip may also include information about precondition violations, if the expressions appearing in the differences cannot be safely parameterized.

Semantically equivalent differences, and renamed variables are not examined against preconditions, since they should not be parameterized. JDeodorant automatically detects the local variables that have been consistently renamed between the clone fragments (as shown in the bottom-right side of Figure 2).
Feature 3: Clone refactoring
Based on the location of the clones, JDeodorant determines automatically the best refactoring strategy:

As shown in Figure 3, JDeodorant can generate a detailed preview of the refactoring to be applied, where the developer can inspect all the changes that will take place at a fine-grained level. Finally, the user can undo and redo the applied refactorings, since they are recorded in the change history of Eclipse. 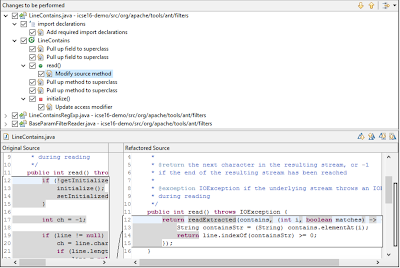 JDeodorant is an open-source project hosted on GitHub.
Videos demonstrating the use and features of JDeodorant can be found on YouTube.