Diversity in CS shines at NSBC 2016

Earlier last month, I spent my weekend in the beautiful A-T-L, Georgia where I had the pleasure of attending the first annual National Society of Blacks in Computing (NSBC) Conference. This is separate from NSBE or Richard Tapia, though related (and almost just as new to me as NSBC). When I started studying CS, though I was aware that there were few females, and even fewer females that look like me, I was fortunate enough to have a solid support system from my mentor (Dr. Jim Bowring) and participation in SC LS-AMP under the direction of Christine Moore. However, the community that I found at NSBC goes above and beyond any of my prior experiences for various reasons, which I will attempt to summarize below.

NSBC was started with the hopes of building a community and awareness of  the accomplishments of blacks in computing; though if you attend NSBE, for example, you'll see hundreds if not thousands of us, that's is not the case in CS. We have much fewer African Americans in CS than any other engineering discipline which, I don't find surprising as I am typically one of few African Americans at the conferences I regularly attend. It was also apparent in the significantly smaller number of attendees at NSBC in comparison to engineering targeted groups like NSBE. But when I say it was refreshing to be around others like me on a personal AND professional level; people with similar research interests and areas that I would have NEVER met had it not been for NSBC.

However, when I say we are here...we are here. The conference had an attendance of 90, higher than they (and I) expected. Especially being the first year of the convention; nevertheless, NSBC was truly an informational and inspirational experience that I recommend to any African American studying or with a career in computing.

Now I would like to note that it seems a large part of the goal of this convention is to recruit more African Americans studying CS into PhD studies and then academia. So the target audience is undergrads and grad students (both early and late in their studies) that haven't made a decision regarding what they are going to do or need some inspiration and information to make a decision. Though there were some industry folk, both there as mentors and to learn more about potentially transitioning from industry into an academic career.

I would also like to note this was not a blacks rule, everyone else drools kind of conference. It was empowering, but there was lots of advice and anecdotes that attempt to put us in our places as well regarding how we perceive our place in the community, the non-uniqueness of our struggle to our race, and how we can use our resilience to build relationships and be successful through adversity. The example that stood out to me was Ben Shneiderman, who is basically the father of the field of Human Computer Interaction. Before he was renowned and successful, however, he was a leper in the CS community, constantly ridiculed, belittled, and disrespected. He even had trouble getting tenure promotions, something we wouldn't expect a white male to have any issues with. However, ignorance is real and transcends race, ethnicity, and culture. Sometimes we're just scared of what we don't  know or understand...so just like Ben, help them understand. Be a part of your community, despite the adversity, and continue to stay true to who you are and what you believe. Once they understand, they'll come around. And if they don't, you didn't need them to begin with.
Though some sessions were for all, most sessions were divided into three tracks: undergraduate, graduate, and future faculty. Being I'll be on the market in the Fall, I attended the future faculty track where I was able to gather extremely useful information, mostly in the form of anecdotes delivered by computer scientists with various education backgrounds and career paths. However, I was told all tracks were valuable and provided both opportunities for learning, networking, and personal growth. For more information on the program from this year's conference, look here: https://goo.gl/oZA6ez

I want to narrow in on the networking point...we really don't hear enough about all the GREAT things we are doing in computing and computing education. One thing in particular that stood out to me at this conference was the incredible intelligence, resilience, and success our people have come to achieve and utilize. For example, I had the absolute pleasure of meeting Dr. Elva Jones. Dr. Jones got her PhD from NC State (something I was almost embarrassed that I didn't know); afterwards, she got an offer to come back and teach at NCSU and turned it down to go back to her HBCU alma mater to give back (Winston-Salem State). And give back she did...Dr. Jones is the founder (and legacy behind) the CS department at Winston-Salem State! Probably the coolest thing I've ever heard...and it hits so close to home. Now I was really embarrassed that I didn't know who she was...though super glad I got to meet her. Not to go on too much of a tangent, but this is why we need more specialized efforts in recognizing and archiving the achievements of African Americans in CS...unfortunately they tend to fall by the waist side, leaving people like myself to find inspiration on their own. One initiative I've been involved with plans to change that - maybe I can give more details on that later when it's come closer to finalizing ;).

To better assist with networking and the forming of relationships (i.e. professional, mentoring), the organizers used personality assessments to provide personality profiles to each attendee. They used stickers on our badges to show what personality profile we are, and for many this was a great way of meeting like minded people that could potentially contribute to each other's career. I will say I didn't use the stars to decide who to meet, but for those who know me I just love meeting new people...like these wonderful women pictured below. I already knew one of them, but the rest I met at the conference. I can honestly say about each and every one of them that we have formed some sort of foundation to a future relationship in our careers, both mentoring and professional.

At the end of it all, there was a dinner with a keynote and surprise guests. The keynote was GREAT (I'll talk about in follow-up day by day details), but the surprise guests were the founders of the aaphdcs listserv! It was such a humbling (and tear jerking) experience seeing them take in all the beautiful, intelligent African American Computer Scientists around them. I had a similar moment with one of the other faculty attendees that where we both took a step back to take in the idea that we are building relationships that will help bring in a new generation of diversity in tech.

I would also like to mention that aside from the fact that they had us in the NICEST hotel I've ever stayed in for a conference, the food was PHENOMENAL! There were options for everyone, and plenty to go around. The only downside, cash bar :(. But, due to the hospitality of the organizers, we were able to have some fun after hours watching the NBA Finals and enjoying each other's company (with free alcohol, which never hurts XD).

Now that I've given you an overview of my experience and what I thought was great about NSBC, I hope it'll inspire you to join the community or spread the word so others know they're not alone! We're here baby! 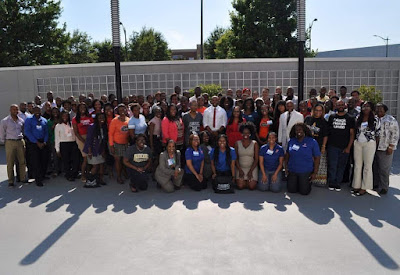 Editor's Note: As Editor-in-Chief of the IEEE Software Blog, it gives me great pleasure to welcome Brittany Johnson as a new associate editor for the blog. She will blog about diversity in computing as well as about the content in the new issues of IEEE Software Magazine. - Mei Nagappan